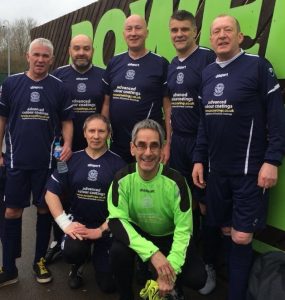 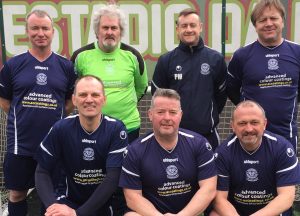 It was a dull rainy day in both Shrewsbury and Birmingham for our over 50’s in the attempt for us to go one better this year and win the Walking Football Category of the equivalent to the FA Cup.

Our forwards matched the weather as goals rained in from the word go, in Shrewsbury, Ian Gough Managed to take the Birmingham Whites through to the semi final stage with a glut of goals.

Competing in a group including teams attached to Shrewsbury Town and Telford Utd the tone for the afternoon was set in the first second of the opening game against Telford Stags B with Kev Reid firing in a left foot thunderbolt straight from kick off. Birmingham were from then on in total control of a 10-2 victory, which was capped with a spectacular Shay Flaherty effort.

In the second fixture against an aggressive Shrewsbury Town team 2 early goals from Kevin Mann and a third from Kev Reid settled any nerves. Shrewsbury fought back and with the game poised at 3-2 the two Kevin’s combined again to see Birmingham home.

With qualification assured they went into the final group game against whipping boys Worthen & Brockton full of confidence and came out 11-1 winners topping the group with 27 goals in their three games.

The semi final against Telford Stags A was settled early again as Birmingham gained a two goal lead and were in total command as they strolled into a 5-1 lead. The only blemishes were two late goals from Telford giving them pure consolation in the last minute. 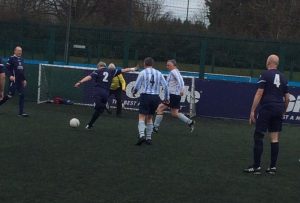 To qualify for the semi final Shrewsbury were once again the opponents. As before Mann and Reid, gave them the perfect start as they went into a 2 goal lead. A defensive mistake and a dubious penalty meant Andy Monk’s goal was breached twice and suddenly the game looked like it was slipping away. Birmingham needed some inspiration and Captain Simon Dyer took it on his own shoulders and rallied with two goals himself to see his side win the tournament with a 4-2 victory, and progress to the semi final stages of the FA Peoples Cup.

Manager Razor commented, ‘I’m so proud of my team, fine all round performance lead by Captain Simon Dyer with Andy Monk in goal, Shay Flaherty and Rod Thompson at the back and the 2 Kevin’s up front who terrorised the other teams all day with a fine display of attacking football linking up well to score 26 goals between them’. 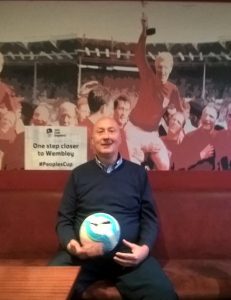 In Birmingham a thoroughly disciplined performance meant the Birmingham Blues also qualified to the semis of the Peoples Cup, potentially setting up a inter club match in the latter stages! The Blues met Leicester in their first fixture and almost repeated their 7-0 success in the Midlands final with a comfortable 4-0 victory, two goals from Dave Norton and one each from Andy Struthers and midfielder Mike Milligan. Wolves, Walsall and Hartshill all found similar treatment, as Birmingham’s all-round superiority meant further victory of 4-0, 5-0 and 6-0. Defender Darren Bradley was imperious at the back, as he replaced the injured David Castle, and the ever impressive Les Dawson in goal Birmingham looked certain to qualify. 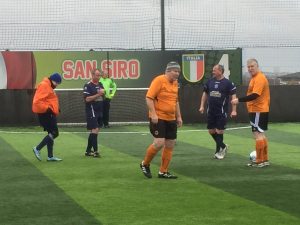 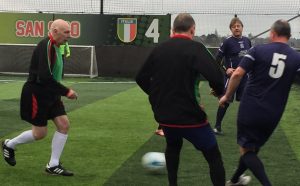 The semi final saw them once again meet Leicester who decided aggression was their best chance of beating Birmingham. Two brilliant saves from Dawson kept them at bay, then the impressive Mike Milligan scored a superb brace to calm any semi final nerves. A sending off for Leicester prompted Darren Bradley to comment that we needed more punch for the final. The 2-0 victory meant they had scored 21 goals without reply as they met Pele’s Pearls in the final ,a team put together on that morning but full of old professionals that had just reached the 50 mark. 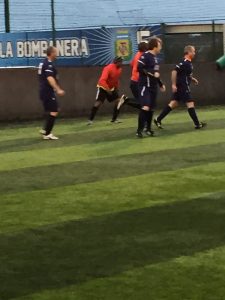 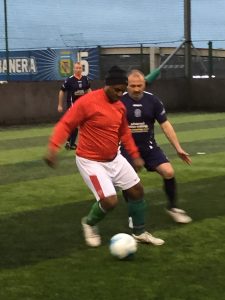 Two brilliant Dave Norton strikes settled it for the Brummies as shots rained in, and whilst in total control a consolation goal with 20 seconds to go meant a brilliant double for the Birmingham club.

Manager Paul Murtagh commented, ‘The team today were a pleasure to watch, total dominance in every game made my job very easy! With two important players still to return after injury we’re looking in good shape for the latter stages. The performance capped off a brilliant day all round for all our teams.’ 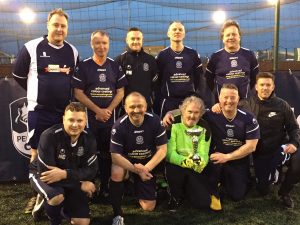 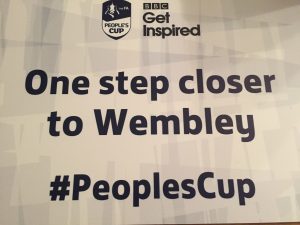