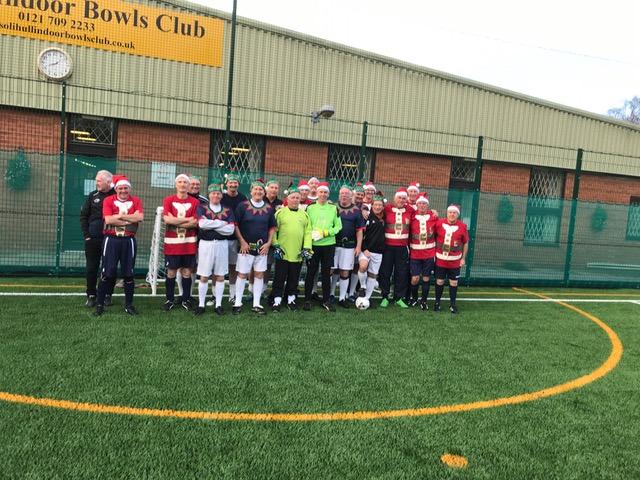 Due to late withdrawals due to illness and injury, BWFC Santa’s Over 65’s were forced to call up Academy Graduate Paul Murtagh to play in the inaugural Santa’s Charity Trophy match versus Coleshill Elves.

The Santa’s started slowly and found themselves 0 – 1 down with eight minutes on the clock, the goal being scored by the Elf’s centre forward,  Big ( Bah Humbug !! ) Bob.

However, Birmingham soon found their feet after this early set back, with young Paul Murtagh who was playing his first game for the Over 65’s, scoring two goals to take the Santas into the half time break leading the Elves by 2 goals to 1.  However some naughty Elves were not playing the match in the spirit envisaged when the idea of a friendly Charity match between the two clubs was suggested. They did not appear to comprehend the words FRIENDLY and NON CONTACT.

Another goal from Paul to complete his Hat Trick put the Santas 3 – 1 ahead and he was withdrawn from the fray to rapturous applause from two old ladies and a dog who had wandered in from the park next door. Shortly after Coleshill levelled things at 3 – 3 and at this stage were looking likely winners, but the Santas dug in and began to play some good neat football again.

With 3 minutes to go young Paul Murtagh re-entered the arena and within seconds he scored with a shot from within his own half to put the Santas 4 – 3 up, but alas victory was stolen away from them in the dying seconds when the Elfs scored an equaliser that the behaviour of a small minority of their players did not deserve.

So the Santas and the Elves share the trophy for six months each and Paul Murtagh had the honour of taking the match ball home. Well he does own it so I suppose he’s entitled to !!

£130 Pounds was raised in match fees by our team on the day. A splendid effort. Thank you everyone for this. The money will be donated to the Marie Curie Hospice in Solihull in the New Year.