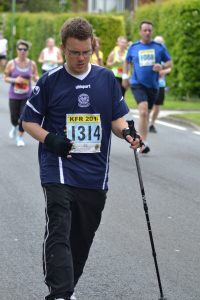 Many of you will know Steve Rogers, a member of the walking football section at Beechcroft.

At the end of October, Steve will be going out to Namibia with a group of around 20 brain injured individuals and their buddies from the Silverlining Charity, a charity that helps brain injured people rebuild their lives through helping others.

The group will be going to the Ovihitua Primary School in Omaruru, a rural area close to the Namib Desert, where they will be helping with maintenance work, painting and decorating and helping to teach the school children. They will be sleeping under canvas and living in very ‘basic’ conditions. As well as benefiting the school, the trip is designed to stretch and test each of the individuals who are going. As part of the challenge, each of the participants has had to raise the funds to cover the costs of their trip.

Steve has already completed a number of challenges to help raise funds including: the Knowle Fun Run, where he walked the 5 mile route in 2hrs; a 169 km cycle ride at the David Lloyd gym in Solihull, equivalent to the distance between Villa Park and Wembley stadium in a time of 7hrs 17mins; the 30 km Heart of England bike ride on his trailer bike with his dad; and, to top everything, he completed a tandem skydive with the army’s Red Devils Free Fall team jumping from a height of 13,000ft (or 2.5 miles)!

Steve has almost reached his fundraising target but as a final event before he leaves for Namibia, we have organised a game of walking football under the new lights at Beechcroft on Friday 21st October 2016, starting at 7pm, followed by coffee and cakes and a raffle.

The game is open to any walking football player to play and we’re hoping that a few ex-professionals from some of the Midlands’ clubs will join us. They’ll be no charge to play, but we hope that players will make a small donation to Steve’s fundraising efforts.

Following the game we’ll enjoy a cup of coffee, some home made cakes and draw the raffle. Steve’s already had donated some great ‘football themed’ prizes, including a genuine Capital One Cup football used by Leicester City and signed by their 2015/16 squad, a signed West Bromwich Albion football, a signed Birmingham City home shirt, and two pairs of tickets for Aston Villa vs Blackburn Rovers. Tickets cost £1 for a strip of 5 and you’ll see them on sale at the regular events taking place at the club in the lead up to 21st October.

Thank you so much for reading this and I do hope that you’ll be able to join us on 21st October either to play or spectate and help to support Steve in his final fundraising effort.

If you are unable to join us on 21st October but would still like to support Steve, please go to: https://uk.virginmoneygiving.com/StephenRogersb93